How many historical figures or emblems will be sacrificed at the altar of political correctness.  We have recently witnessed the demise of the confederate flag simply because a bunch of liberal morons decided to use it as a scapegoat following the Charleston, South Carolina church shooting carried out by white supremacist nut job Dylan Roof.  Granted Roof was a self avowed white supremacist, that is still no reason to completely eliminate a portion of American history from the town square.  The confederate flag played a major role in the history of this country and it wasn’t until the 1940’s that it became synonymous with segregation and therefore became the flag representing slavery.

Erasing portions of American history falls in line with the liberal progressive mindset though as they intend to erase history or at least portions of history that don’t align with the politically correct mentality they intend to instill on the youth of today.  The elimination of the confederate flag from the town square is literally just the tip of the proverbial iceberg as this led to continued outrage from the left against monuments, streets, college halls, basically any type of landmark named after an individual that may have at some point in history owned slaves or been associated with anyone that owned slaves.

Colleges around the country have been torn over whether or not they should rename halls and other buildings that bear the historical names of historical figures that may have owned slaves all in the name of political correctness. 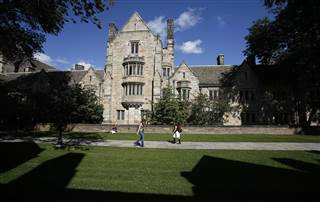 According to NBC News.com,

Yale University will scrub the title of “master” for faculty who work in the residential colleges — but it will not change the name of its college honoring John C. Calhoun, a white supremacist politician and strong proponent of slavery in the 19th century.

Princeton University said Monday that it will keep President Woodrow Wilson’s name on its school of public and international affairs and a residential college despite calls to expunge his name from those institutions on the Ivy League campus because of his staunch support of racial segregation.

These incidents are only two of the many incidents that have come up following the tragedy in Charleston, South Carolina.  Throw in the black lives matter morons and you have a force that has proven to be nearly unstoppable as most people simply do not have the balls to confront these race baiting activists over the fear of being labeled “racist”.

If only these morons realized that some of the loudest voices for segregation throughout history have come from the Democrat party which many of claim to align themselves with.  Wilson himself was indeed a liberal progressive Democrat who helped to start the progressive movement that has led to what we are witnessing today.  The mindless safe spacers on college campuses have a demented view of history and only interpret history in such a way that suits their ridiculous demands they are putting forth.  When the demands of the black lives matter morons are put in perspective they aren’t looking for racial equality at all, they are inadvertently pushing for the mindless liberal progressive ideologies and they don’t even realize it.  They are essentially advocating we head down the road to socialism which will inevitably lead to their demise and the demise of the republic as we know it.

In November, student protesters occupied the office of Princeton President Christopher Eisgruber. They demanded that the university take steps to improve the racial climate on campus, including removal of the Wilson name from important buildings. Eisgruber agreed to refer the issue to the board of trustees.

The safe space babies who have no real understanding of history decided to take their antics to the office of the President of Princeton University.  This is exactly the problem we are facing in society today, whenever these little whiny brats feel in any way offended or find something in society they don’t agree with they stomp their feet until they get their way.  Not to mention the fact that this has led to the elimination of nearly all dissenting thought on the campuses around the country today.

If the elimination the confederate flag and the elimination of historical figures from the public square throughout the country isn’t enough, we are now witnessing the push to eliminate another battle flag from the public square.  This case takes it one step further as the ridiculous liberal morons are trying to infringe on the first amendment right of freedom of expression as they are trying to keep individuals from wearing clothing or hats depicting the Gadsden flag.

Yet again this comes from a group of people that have no idea what the Gadsden flag even stands for the the role it played in history.

In December 1775, “An American Guesser” anonymously wrote to the Pennsylvania Journal:

“I observed on one of the drums belonging to the marines now raising, there was painted a Rattle-Snake, with this modest motto under it, ‘Don’t tread on me.’ As I know it is the custom to have some device on the arms of every country, I supposed this may have been intended for the arms of America.”

This anonymous writer, having “nothing to do with public affairs” and “in order to divert an idle hour,” speculated on why a snake might be chosen as a symbol for America.

First, it occurred to him that “the Rattle-Snake is found in no other quarter of the world besides America.”
The rattlesnake also has sharp eyes, and “may therefore be esteemed an emblem of vigilance.”

Furthermore,
“She never begins an attack, nor, when once engaged, ever surrenders: She is therefore an emblem of magnanimity and true courage. … she never wounds ’till she has generously given notice, even to her enemy, and cautioned him against the danger of treading on her.”

Finally,
“I confess I was wholly at a loss what to make of the rattles, ’till I went back and counted them and found them just thirteen, exactly the number of the Colonies united in America; and I recollected too that this was the only part of the Snake which increased in numbers….

“‘Tis curious and amazing to observe how distinct and independent of each other the rattles of this animal are, and yet how firmly they are united together, so as never to be separated but by breaking them to pieces. One of those rattles singly, is incapable of producing sound, but the ringing of thirteen together, is sufficient to alarm the boldest man living.”
Many scholars now agree that this “American Guesser” was Benjamin Franklin.
Franklin is also known for opposing the use of an eagle — “a bird of bad moral character” — as a national symbol.

Now that we have a little insight as to the history of the Gadsden flag and the important role it played in this country’s history, it helps to put into perspective just how ridiculous this latest accusation is that is being put forth to depict the Gadsden flag as racist.

A black employee at a private business felt he was the victim of racial harassment because a co-worker wore a cap sporting the Gadsden “Don’t Tread On Me” flag, and filed a complaint with the U.S. Equal Employment Opportunity Commission.

This employee was apparently triggered by an individual who decided to wear a hat depicting the Gadsden Flag and decided to take it upon himself to file a complaint with the EEOC and they actually decided to follow through with this complaint.  Where do we draw the line when it comes to “offensive” behavior?  Will we eventually come to a point in which people aren’t allowed to be individuals simply because they fear that any form of expression or individuality may lead to them offending others resulting in a lawsuit?  If this political correctness run amok continues we will be just what the government wants, faceless, mindless, puppets of the state.